As many investors seek better and less risky investments, there is one opportunity that stands apart from the rest.

Life settlements have been around for years – but it’s still a growing industry. The reason most people haven’t heard about them is because 95% of the industry is owned by major institutions such as hedge funds, institutional investors, and insurance companies.

Keep reading to discover the history, benefits, and future of the life settlement industry and if it makes sense for you to invest in this industry.

What is a Life Settlement?

The growing life settlement industry is worth $50 billion. In addition, this type of investment provides benefits to both the insured and investor.

Let’s look at one example of how a life settlement works.

Larry is eighty-five and owns a $5 million insurance policy and pays $200,000 each year in premiums. He has outlived the usefulness of the policy, so he has three options to consider:

He decides the best option is to sell the policy, which allows him to receive three to four times the cash value of the policy itself.

The History of Life Settlements

Let’s take a step back for a moment to explore the history of this industry – how and when did life settlements begin?

Life settlements aren't new. They've been around in one form or another since 1911, when the U.S. Supreme Court established that life insurance policies are assets – and assets come with the right to be sold.

As an investor, you might be wondering how this practice is legal. In 1911, the Supreme Court ruled in a case, Grigsby vs. Russell, which determined that because a life insurance policy is their personal property, they are able to sell it.

The case made its way to the Supreme Court in 1911 after a doctor named A.H. Grigsby treated a patient named John C. Burchard – and Burchard offered to sell the physician his life insurance policy for $100 – as long as Dr. Grigsby agreed to pay the remaining premiums.

When Burchard died a year later, Dr. Grigsby attempted to collect the benefits from the life insurance policy he'd purchased a year earlier. Unfortunately, the executor of Burchard's estate didn't want to turn over the lump sum payment. The executor took it to court and won.

Here's what Holmes said while delivering the court's opinion:

"So far as reasonable safety permits, it is desirable to give to life policies the ordinary characteristics of property. To deny the right to sell except to persons having such an interest is to diminish appreciably the value of the contract in the owner's hands."

Just like that, life settlements became a viable alternative investment opportunity--and one in which Americans could sell their premiums for much-needed cash.

While the Supreme Court's ruling on Grigsby vs. Russell opened the door for people to sell and purchase life insurance policies, it wasn't until later that the "life settlement industry" emerged.

The industry officially began in the early 1990s when life settlements were referred to as viaticals. At the time, millions of people were becoming infected with AIDS, which meant that there were many victims and families devastated by this prognosis.

Since those that were diagnosed with AIDS were typically younger, this meant they didn’t own much as far as an estate, but they did own smaller life insurance policies. Life expectancies were around two years and people with the disease required additional finances to live out the rest of their lives as comfortably as possible. And so, the industry began with many selling life insurance policies at the time.

These types of deals continued for decades, but as medical technology advanced, so did life expectancy. Viatical settlements became less common, but another group of individuals in need of money emerged: senior citizens.

In the late 1990s, a new but similar asset class emerged, called life settlements. The main differences here include:

Why Does Investing in Life Settlements Makes Sense?

A life insurance policy is a life-long commitment – one that lasts through the good, the bad, and sometimes longer than necessary.

Don't get the wrong idea, life insurance makes sense for those insured. Especially when you're younger, have a family, caring for a loved one with life-long special needs or want to ensure that your family is financially cared for in the event of a death.

However, after the kids have gone out on their own or incomes become fixed – the policy becomes a burden. Unfortunately, that monthly premium still needs to be paid. Sure, some people let the policy lapse, but they walk away with nothing except the nagging feeling they've wasted thousands of dollars on monthly payments.

There are a couple types of investors that can purchase a life insurance policy. One is institutional investors, the other is mid-to-high net worth accredited investors.

Investing in life settlements makes sense for a number of reasons, including:

By selling a life insurance policy, the insured can discreetly liquidate an asset and receive more than the cash value in the policy. The investors ultimately receive a sizeable return on their investment.

Life Settlements as a Growth Strategy

Life settlements contribute to retirement funds or legacy wealth. Investors should not approach this investment as an income or a liquid short-term investment. There is a known payout on purchased policies, which eliminates the uncertainty that many investments possess.

You can expect an investment range from $50,000 to $5,000,000 depending on the structure. To ensure success with life settlements, it is essential to work with established companies that have a track record of helping clients as well as a high level of transparency.

You might still be skeptical at this point, especially if you’ve heard any of the following myths about life settlements. Find out the truth about each.

For both the insured and the investor, it’s crucial to fully understand the action you’re taking before making a decision about life settlements.

What You Might Not Know About Life Settlement Investments

Speaking of making an informed decision, there are a few things you might not know about life settlement investments.

Whether you’ve discussed this opportunity with your financial advisor before or the concept is brand new, consider the following ideas about this investment:

While each of these are beneficial for the investor, it’s important to know what you’re investing in before you make a decision. Next, we’ll explore both pros and cons of life settlements.

Initially, there have been some challenges in the industry. For example, many did not know that policy owners could even sell their policy. It was also necessary for providers to become licensed in order to work with investors and perform due diligence.

While we believe that investing in life settlements is largely beneficial, let’s first look at a few potential shortcomings.

Next, let’s explore some of the pros of investing in life settlements.

If it’s not already clear why investors love life settlements, let’s explore a few reasons they are an ideal investment.

It’s for these reasons (and more) that many investors have invested in life settlement funds.

Who Are the Major Investors in Life Settlements?

Of course, there are other institutional investors, including investment banks, hedge funds, pension funds, along with recognizable names like Bill Gates and Warren Buffett.

Many investors are initially cautious when they hear about life settlements because they’re not sure if they are a safe investment.

You might be thinking, that sounds great but how do I reduce risk exposure with life settlements?

There are several steps you can take to reduce risk exposure, including:

What’s the Next Step for You?

Now that you have a full understanding of life settlements, what is the next step for you? Contact us today to discuss your options for life settlement investment and take an important step with your financial strategy.

Download the PDF of Why Life Settlements Make Sense 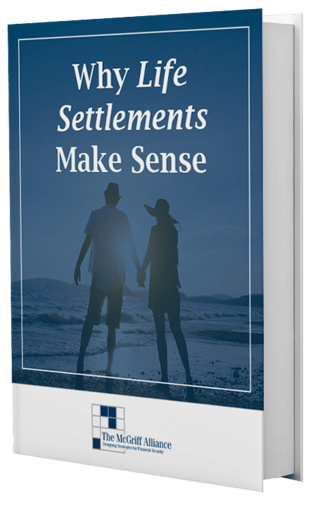