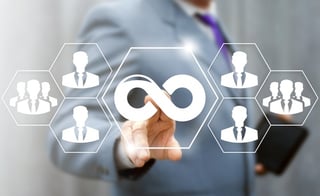 It was just before the turn of the century when an intrepid life insurance agent and military pilot wrote a book that would change the financial lives of many Americans for the better.

The book was called "Becoming Your Own Banker," written by R. Nelson Nash, and it described a new way of building personal wealth. The concept is known as infinite banking. Today, the book has been reprinted several times, spawned its own series of courses and helped countless families achieve financial independence.

Nash isn't your typical financial strategist. He studied forestry, worked as a forester in North Carolina for several years and spent 30 years flying with the Army National Guard.

Thankfully, he eventually made a career switch and became a life insurance agent.

It was during his time helping people connect with the right life insurance services that he discovered a way that allowed people to escape the tight, subjugated grip of banks and large financial institutions and become their own bankers.

Nash was dabbling in real estate–and paying nearly 10 percent interest on the loans he needed to procure land, according to his book.

Initially, he was fine with the arrangement, because that was how the system worked.

But then the prime rate rose and topped out at a whopping 21.5 percent. That, combined with the 1.5 percent he was paying above prime simply proved too much.

So he looked for a way to use his own money to invest–and the infinite banking concept was born.

Nash had whole life insurance, for which he had been paying premiums for quite some time and building up a significant cash value.

That cash value could be borrowed and used for anything, including homes, vacations, medical expenses, retirement and, yes, investments in real estate, business or anything else.

And that's exactly what the father of infinite banking did.

He "borrowed" his own money, invested it and discovered that the money he had borrowed–plus the value of his policy–was still earning interest and possibly dividends.

So Nash did it again and again–and he did it successfully. Banks, government regulations, exorbitant interest rates and taxes were no longer a concern.

He had succeeded at becoming his own banker.

Then he wrote a book, educated others on the infinite banking concept and changed the lives of countless Americans.

Infinite Banking and Your Future

When the book first came out around 2000, there was pretty much only one way to learn about the infinite banking concept and put it to work for yourself.

Thankfully, other financial advisers and insurance professionals quickly caught on to the power of the infinite banking concept and more Americans began using the system to achieve financial independence.

It is a great program that can provide you with an array of benefits, including:

Even though the concept of infinite banking is less than 30 years old, the benefits and financial freedom it can deliver to you and your family are timeless.

If you are tired of banks, red tape and incredibly high interest rates, do what Mr. Nash did and explore infinite banking. You just might make history for you, your family and financial future.