Part of the attraction of putting your money in a bank is that it is protected from fraud and theft . . . or is it? What if the criminals are government authorities who can freeze or seize your account?

Civil Asset Forfeiture Laws allow law enforcement and the IRS to take assets and money without convicting or even charging the owner with a crime.

In fact, civil asset forfeitures are becoming more prevalent because in civil cases the burden of proof is much lower, and the agencies taking the assets stand to benefit from the confiscations.

Jeff, Mitch and Rich Hirsch have run Bi-County Distributors out of Long Island, New York for over 27 years.  They supply candy and snacks for convenience stores 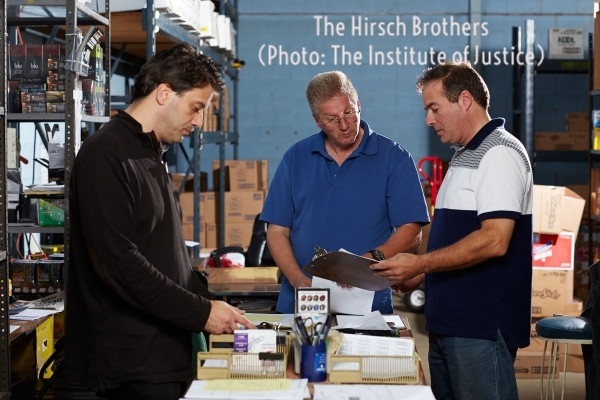 in the area.  Since most of their customers operate on a cash-only basis, frequent cash deposits are unavoidable.

In 2012, one of the brothers thought the teller was joking at first when he went to make such a deposit, only to find out that their account was frozen.

"Using a law designed to catch drug traffickers, racketeers and terrorists by tracking their cash, the government has gone after run-of-the-mill business owners and wage earners without so much as an allegation that they have committed serious crimes.  The government can take the money without ever filing a criminal complaint, and the owners are left to prove they are innocent.  Many give up."

The Hirsch brothers had committed no crime, had not engaged in tax fraud, nor had they been charged with a crime.  So why was their account seized?

The Bank Secrecy Act of 1970 requires that banks and other financial institutions report cash deposits over $10,000.  Because the Hirsch's had experienced the closure of three bank accounts due to the paperwork burden of their frequent large cash deposits, their accountant had advised them to keep deposits under $10,000, which they had done for more than a decade.

However, cash deposits under $10,000 can be seen as "smurfing," a term used to describe someone attempting to evade government scrutiny by breaking down large deposits into smaller amounts that are below the reporting threshold.  A detective noticed their pattern of deposits, and used that as an excuse to seize the brothers' account.

Even though the brothers were never charged with a crime, they were offered a settlement twice, which would have involved giving up a large part of their money to receive the remainder back.  They hired a forensic accountant to review their books, and it was actually discovered that they had overpaid their federal taxes!

Unfortunately, this story is not an isolated incident.

Civil asset forfeiture isn't limited to bank accounts, nor is it limited to the IRS.  Local and state law enforcement agencies often collaborate with the DEA, FBI

and IRS.  Cash, cars, boats and houses are seized every year without any formal accusation of wrongdoing.  And often, the money taken from innocent citizens translates into spending sprees for law enforcement agencies.  As one honest officer confessed, "We usually base it on something that would be nice to have that we can't get in the budget. . . It's kind of like pennies from heaven, that get you a toy that you need."

The most common purchases are weapons and vehicles, but confiscated assets have also been used to buy electronic surveillance equipment, conference tickets, a $5 million dollar helicopter, a Zamboni, kegs of beer, bottles of Crown Royal, and a margarita machine for office parties.

In early 2015, the Hirsch brothers got their money back.  The feds returned the nearly $447k from their business bank account and cleared them of all wrongdoing on the conditions that they were not allowed to seek reimbursement for the tens of thousands in legal fees and court costs, and that the U.S. Attorney General's office was released of all liability.

Why after 3 years was the money suddenly released back to them?  As it turns out, our new U.S. Attorney General, Loretta Lynch headed up the office that oversaw the Hirsch case from 2012 to 2015.  After two-and-a-half years, the Hirsch's took their story to the press.  When it looked like the negative press from their story could be problematic for her nomination to attorney general, the money was released on the condition that the office was released of all liability.

THERE IS REFORM BUT IT'S LACKING

A few days before the settlement was reached, then-current U.S. Attorney General, Eric Holder announced that changes were being made to limit civil asset forfeiture.  The new policy would stop state and local officials from "adopting" federal law to seize assets without charging owners with a crime.  However, according to The Institute for Justice, a law firm that has led the fight against civil forfeiture, there are significant loopholes in the new policy.  It allows state and local authorities to engage in forfeiture through joint task forces and joint investigations.  Also, the federal government can still pursue its own civil forfeiture actions.

SO WHERE IS YOUR MONEY SAFE?

Fortunately, there are safer places to put your money than in a bank.  Safety and Privacy are just two of the many reasons we recommend high cash value whole life policies.  Here's more:

Give us a call to learn more about high cash value policies.