Don't be a statistic: Teach your children to protect your family fortune 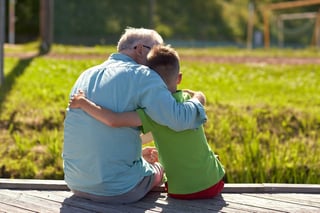 The stories are everywhere, and they are alarming.

They all won millions of dollars in lotteries; all quickly wound up broke.

Some observers call people who waste their winnings unlucky. Some say it was never meant to be. Most say that's what happens when you haven't worked for your wealth, when you let a sudden influx of cash alter your values. They also say it would never happen with their family.

Studies show that 70 percent of wealthy families will lose their assets before the second generation. By the third generation, 90 percent will no longer have wealth.

And if you think it can't happen to your family--if you believe that your family is above becoming a statistic, think again.

But in reality, there are a lot of famous families whose names are familiar but fortunes are long-gone:

These are just a few of the high-profile families that could not hold on to their fortunes. Some lost their wealth because of bad business decisions. Some lost it after forgetting the values and virtues that helped build the wealth in the first place. Others lost it to family in-fighting, alcoholism or an unwillingness to think about future generations.

All of the famous families listed above apparently suffered from some form of "sudden wealth syndrome," a condition that comes on like a freight train and affects people who quickly come into wealth--and then just as quickly squander it.

Lottery winners are the victims of "sudden wealth syndrome" you hear about most (after all, their stories are often the most salacious). But it actually might affect people who achieve their wealth through inheritance equally as often.

That's why you want to be aware of it and take steps to prevent it from happening to the people to whom you will pass along your assets--and one of the best preventative measures you can put in place is heritage planning.

Heritage planning is a form of financial planning that goes beyond dollars, cents and assets to include family values and virtues. It is designed to protect both your wealth and the traits that helped you build it.

When you find a financial advisor who understands the elements of heritage planning, your entire family plays a role in the planning and decision-making process.

In doing so, they learn to value not only your wealth but also the process by which it was built. It's about helping your family learn to live with wealth and avoid becoming a terrible statistic.