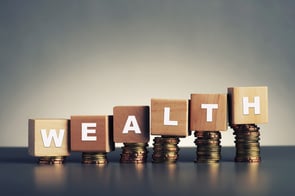 Ralph Waldo Emerson once famously said that "nothing can bring you peace but yourself."

The beloved poet was talking about finding contentment, but he could have just as well been referring to financial self-reliance. After all, you alone are in control of your ability to build bulletproof wealth.

Financial self-reliance means having the wherewithal to withstand an economic crisis without needing additional financial support from lenders, the government, friends or family.

It's also what everyone who practices prosperity economics strives to achieve—and you should, too.

Like Forrest Gump said, "life is like a box of chocolates; you never know what you're going to get." This is certainly true when it comes to finances. Throughout your life, you are likely to have economic ups and downs, opportunities and unexpected challenges, periods of growth and periods of decline.

The key is to be self-reliant and build bulletproof wealth so you can weather the storms.

Put Your Trust Where it Belongs

There are currently about 160 million Americans in the workforce, according to the United States Bureau of Labor Statistics. The vast majority of these men and women rely on their employers to provide them with a paycheck every other week. They trust the organizations for which they work to make smart decisions that will keep the paychecks coming.

And that's a scary proposition, because companies are incredibly fickle, slaves to the bottom line and always willing to lay off their employees to improve profits. For example, on Sept. 28, 2016, seven companies laid off more than 400 employees, according to a website that tracks layoffs at major U.S. companies. The very next day, another 8,350 people who trusted their employers with their financial health found out they would soon be losing their jobs.

Being laid off (or right-sized) can happen at any time to anyone who trusts their employer to help them become financially self-reliant. But it doesn't happen to those who put their trust where it belongs: in themselves.

People who are entrepreneurial-minded or self-employed aren't immune to unexpected financial challenges, but they are often better positioned to address them on their own.

They make decisions for themselves. They aren't at the mercy of an organization or an manager. They control their money. And that's what prosperity economics is all about—controlling your money.

Trusting yourself doesn't mean you have to quit your job and start a business (although many successful practitioners of prosperity economics have done just that). But it does mean that you should develop multiple income streams.

They diversify because they never know for sure when one stream is going to dry up—and they don't want to have to rely on someone else for their financial well-being.

Saving money; many say it's often the only thing standing between the haves and the have-nots.

You don't have to look any further than "The Millionaire Next Door" to see that they're right. The best-selling book written by Thomas Stanley and William Danko explains that many millionaires describe themselves as "honest," "frugal" and "dedicated" to stashing away at least 15 percent of their annual incomes.

And if you don't think you can achieve financial self-reliance by simply saving your money, consider this interesting nugget from the book: Most of the millionaires interviewed didn't inherit their wealth.

They built it by committing to saving their money—day after day, month after month, year after year.

They live simply. Fancy outfits and expensive dinners don't matter to them as much as building bullet-proof wealth. And that's why most said they could live off their savings for at least 12 years.

Wouldn't you like to be able to say the same? If so, start saving and stop spending your money on things that aren't going to help you achieve financial self-reliance.

"A fool and his money are soon parted." Poet and farmer Thomas Tusser wrote these wise words way back in the 1500s, but they are as true now as they were the day they were published.

Smart decisions are at the heart of prosperity economics, and they often lead to bulletproof wealth.

People who achieve financial prosperity aren't gamblers. They don't act on whims or with emotion. They don't turn over their assets to someone else and simply trust that everything will turn out OK. And they don't cross their fingers or throw salt over their shoulders while chasing unrealistic returns.

Instead, they focus on well-researched, solid investment opportunities. They save their money and put it in places that are most likely to deliver solid growth. They choose the principles of prosperity economics over the advice of people they hardly know.

That's why their portfolios tend to consist of mostly of business assets, real estate and other guaranteed assets such as cash value life insurance.

If you really want to build bulletproof wealth, you'll follow the principles of prosperity economics and make smart decisions with your money.

It has been said that procrastination is the thief of time. When it comes to building bullet-proof wealth, it's also the thief of your ability to become financially self-reliant.

So don't procrastinate. Start today. Trust yourself, diversify your income streams, save your money and make smart decisions.

But most importantly, start today.