The Consumer Price Index and the Truth about Inflation 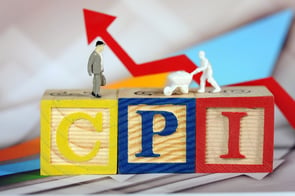 Why doesn't 3 percent ever seem to cut it?

That's the question people across the country wind up asking themselves every time they receive the obligatory cost-of-living raise.

After all, those raises are most often based on inflation figures, which most financial planners put at anywhere between 2.5 and 3.5 percent. So in theory, a cost-of-living raise should at least help you keep pace with your financial obligations.

So why do you always feel like you're falling further behind financially—especially after you receive a raise?

The answer probably isn't going to make you very happy: Your cost-of-living raises don't actually keep up with inflation.

That's right. In reality, inflation is actually much higher than the federal government, many financial planners and your supervisor lead you to believe. And it could be putting your long-term financial well-being at risk.

Many people base their long-term financial decisions on inflation. They use inflation estimates to determine how much they need to save today to ensure they have enough money in the future.

That's a dangerous way to make decisions, because in reality, inflation is a moving target—a target that can change like the weather based on the whims of government officials.

Yes; the same government officials who embrace the principles of prosperity economics, which include making informed decisions, planning, saving and investing wisely, flat out lie when it comes to inflation.

And as you know, lying is not a founding principle of prosperity economics.

But why would politicians lie to the public? Because it allows them to control the economy to get them elected, keep them in office, and line the pockets of the people who support their campaigns and pet projects.

And they do it all at your expense.

That's why the government constantly changes the way they measure inflation and takes steps to manage it to their advantage, not yours. In fact, the way the government manipulates the rate of inflation actually hurts you: You never know the true effect of inflation on your finances, you don't know how much to save, and you actually wind up making uninformed decisions about your current and future finances.

Why you can't get accurate information about inflation

By now you are probably wondering why you can't get accurate information about how much it will cost today, tomorrow, and 10 years from now.

The reason you can't get accurate information about the cost of living is that the U.S. Bureau of Labor and Statistics uses the Consumer Price Index, or CPI, to regulate prices and calculate changes in wages and pensions.

In other words, the CPI measures inflation. But it's not accurate.

The CPI measures inflation by how much you pay for a "basket of goods and services" and how much that changes over time. What it fails to account for is the fact that the basket full of goods actually changes—not just the price.

For example, if you start eating chicken instead of beef because beef has become much more expensive, the CPI doesn't measure the true effect of inflation on your budget. In other words, a substitution can impact both your budget and your quality of life—neither of which are measured by the CPI.

The CPI only measures the increase in the cost of beef, which results in an estimated inflation rate that is actually lower than the actual cost to you and your family.

Other problems with the CPI are that it doesn't include the actual price of buying a house. Instead, it includes an estimate of what it might cost to rent a house.

This just demonstrates that you can't seem to trust the CPI or the government's take on inflation. That's not good news for anyone who is working to save money to buy a house.

That's bad news for you, because you are committed to practicing prosperity economics, which includes making smart, educated decisions.

Just when you thought it couldn't get any worse—it does.

The CPI takes into account changes in the prices of goods and services that are purchased in the marketplace.

But you don't simply exist in the marketplace. You practice prosperity economics, so you have to factor in taxes, measures you take to keep your kids safe, education, health, and the quality of the water you drink.

And those are the things that should be included in any measurement of inflation.

And then there's healthcare costs

As someone who practices prosperity economics, you are committed to planning. You plan your savings, your expenses, and for emergencies. And you also plan for healthcare.

Americans spend a significant amount of money on health care. This is especially true for seniors, who often spend 20 percent or more of their income on healthcare costs.

The CPI doesn't. And that's not the only problem.

That presents problems with planning your savings, funding your investments and life insurance policies, and even paying your bills every week. It can give you a false sense of security. It can lead you to believe you have more money than you actually do. It can lead to dangerous consequences, like not being able to pay for your healthcare costs.

In other words, it affects everything you are trying to do while practicing prosperity economics.

If you are asking yourself if anything is real anymore, you are not alone. Everyone from bloggers to the mainstream media is reporting on the government's inability to provide accurate information to the people who actually pay the bills.

Consider this quote from a story posted on Forbes.com: "The Fed has no excess money or reserves ... so they simply fire up the printing presses and print out of thin air $85 billion of new money each and every month. This is money that goes directly into the money supply."

This means that even the printed money you are holding in your hands isn't real anymore.

The government does this for several reasons:

So that's why the government refuses to fix the problem and simply continues to pump more money into the market without actually backing it up with anything tangible.

It's dangerous. It's unethical. And it directly affects your ability to practice prosperity economics.

So what are you going to do about it?

Unlike the federal government, you do not have the luxury of firing up the printing presses and printing your own money when times get tough. So what can you do about it?

The good news is that you can take steps to deal with inflation. Here are three things you can (and should) do:

If you follow this advice and continue to practice prosperity economics, maybe that 3 percent cost-of-living raise will come closer to cutting it—now and in the future.