The Health and Wealth Connection 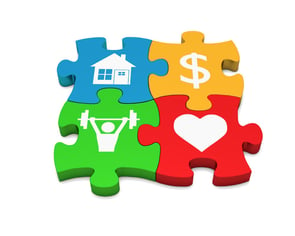 It happens at the beginning of every new year. People flock to gyms, vowing to work out more, eat less, and achieve their fitness goals.

Some do it to live longer. For others, it's about finding love. Then there are those whose New Year's resolutions are all about vanity.

Few do it for their bank accounts. But they would if they only knew the truth: Having a healthier body can actually lead to a better-looking bank account.

And the best news of all is that it doesn't matter when you start. You can start realizing the benefits of a healthier lifestyle any time you choose to do so. All you have to do is dedicate yourself to getting in shape both physically and financially—and practice prosperity economics.

The connection between health and wealth

While no one seems to know for sure which comes—health or wealth—one thing is certain: people who are healthier say they are also wealthier.

According to a poll conducted by the Canadian Medical Association in 2012, more than 66 percent of respondents who earned at least $60,000 said they were in either "very good" or "excellent" health. On the other hand, only 40 percent of those earning less than $30,000 a year felt the same way about their health.

That's the question Thomas J. Stanley attempted to answer in his best-selling book The Millionaire Next Door.

In the book, Stanley describes several behaviors that many self-made millionaires had in common, including averaging a healthy 7.5 hours of sleep per night, waking up early, and exercising an average of 3.5 hours a week.

Stanley's findings are backed up by research that shows that people who exercise regularly tend to earn 9 percent more than their colleagues who do not exercise.

So maybe a fundamental principle of prosperity economics is building your body so you can build your wealth. But then again, maybe the correlation between physical and financial health has nothing to do with stronger, leaner muscles and more to do with discipline and perseverance—which are two attributes people who succeed at practicing prosperity economics also share.

Obviously, discipline and perseverance are both intangible and somewhat difficult to quantify. And maybe that's okay.

So you are disciplined in the way you work to stay physically fit. You wake up early and go to the gym, even if you're tired. You work your way through pain and plateaus to persevere and reach your goals.

And as a result you sleep better, your stress levels are lower, and you have entirely more energy to attack your workday. You also have more oxygen and nutrients making their way through your body. Your memory is sharper, you learn more quickly, and you can work harder, longer, and with more precision than ever before.

Then you really begin to reap the rewards of getting and staying in shape.

You are more likely to be promoted. You face less discrimination. And, according to a study submitted to the Journal of Health Economics, you earn about 2.5 percent more than your colleagues who are overweight—just because you put in the work to eat right and work out.

It might not be fair, but it's true: People who are in better shape enjoy tangible benefits on the job that are really not of their own doing.

Working out makes dollars and sense

You already know that working out makes sense in terms of your overall health. And you know that there is at least some connection between living a healthy lifestyle and having more money.

But did you know that there is also a direct connection between the two? Of course you did, because you understand that people who are healthier spend less money on healthcare costs.

In fact, research presented at the American Heart Association's Quality of Care and Outcomes Research 2012 Scientific Sessions revealed that there is a direct link between exercise, long-term health, and lower healthcare costs. According to the study, people who were able to stay fit had healthcare costs that were nearly 40 percent lower than those who were not fit. The savings totaled nearly $2,000 a year for each of the more than 20,000 people who participated in the study.

If that's not a reason to practice prosperity economics and get healthy, what is?

Five ways to practice prosperity economics and get healthy

Now that you know that the benefits of exercise and living a healthy lifestyle go well beyond building a better body, it's time to get started. Take a look at these five ways to practice prosperity economics and get healthy—both physically and financially.

Yes, living a lifestyle that keeps you in shape is smart for your physical fitness and your financial fitness. And the good news is that you don't have to wait until New Year's Eve to make your resolutions. You can (and should) start today.