When Will the Next Bubble Burst and How Will You Protect Yourself? 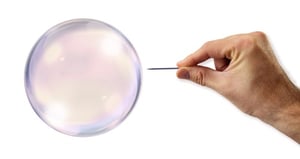 Do you remember a movie called "The Big Short"?

It came out in 2015 and told the story of four visionaries who predicted the bursting of the housing and credit bubble that occurred in the late 2000s and led to the Great Recession.

The movie won Academy Awards for writing and adapted screenplay, was nominated for Best Motion Picture of the Year and took home a slew of other nominations and awards from BAFTA, the Screen Actors Guild and the Broadcast Film Critics Association.

And then it was largely forgotten.

If you haven't watched the film in a while (or if you've never seen it), now might be a good time to check it out on Netflix – because if history and Hollywood have taught Americans anything, it's that more bubbles are sure to burst.

The only questions are when will the next financial meltdown occur, and how will you protect yourself?

America learned some hard lessons during the Great Recession, and in response, some changes have been made.

Lending standards for mortgages have been tightened, mortgages that require no income or asset verification have fallen out of favor, and underwriting and appraisal practices have been refined.

These are positive developments, but some things have remained the same.

And then there's the matter of banks and large financial organizations that are still shortchanging investors through price-fixing and other scandals.

In a sense, the financial services industry is heading right back in the direction it was going just before the bubble burst in 2008.

Consider this statement from Dr. Michael Burry (who was played by Christian Bale in "The Big Short"), which was published in New York Magazine back in 2015:

"We are right back at it: trying to stimulate growth through easy money. It hasn't worked, but it's the only tool the Fed's got. Meanwhile, the Fed's policies widen the wealth gap, which feeds political extremism, forcing gridlock in Washington. Interest rates are used to price risk, and so in the current environment, the risk-pricing mechanism is broken. That is not healthy for an economy. We are building up terrific stresses in the system."

In other words: another bubble is likely to burst.

How will you protect yourself?

According to Burry, protecting yourself from the next economic meltdown requires a five-step strategy:

1) Focus on growth. Now is not the time to be frugal. Instead, you should be focusing on growth.

2) See the big picture. Recognize that your mortgage, investments, insurance and personal finances are all connected; what happens to one will affect the others.

3) Create cash flow. When the economy tanks, cash flow is more important than net worth. Create it now, before the bubble bursts.

All signs point to another bubble bursting. Will you be ready for it this time?