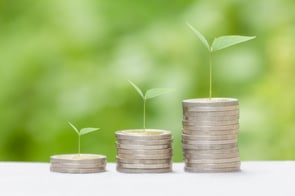 "It often takes 20 years to make an overnight success."

This paradox is popular among poets, musicians and Hollywood actors who have toiled without an ounce of recognition, only to see their work "suddenly" earn them critical acclaim, Emmy Awards and Oscars.

Yes, everyone loves an overnight success story. But as the old axiom says, behind every "new" Wall Street darling, starlet or singer is a lot of hard work that occurred over a long period of time. Heck, even Vanilla Ice, he of the one-hit-wonder fame, claims to have spent three or four years perfecting his craft before blowing up on an international level.

In reality, very few people truly achieve overnight success. And even though the media love to lavish attention upon them, fewer yet achieve sustainable success. Think about all of the lottery winners, tech startups and musicians that you've seen quickly come and more quickly go over the years—there actually aren't that many, and their names are easily forgotten.

Now take a moment to think about some of the more famous overnight success stories (at least as told by the media) who have managed to stick around:

Each of these "overnight success stories" tried and failed before reaching the pinnacle. Sure, they likely benefited from talent and serendipity, but they also demonstrated patience, practice and determination. In other words, they won the long game, which is at the core of what it means to practice prosperity economics.

Prosperity economics is all about perseverance; few people reach their financial goals without it. Sure, some win the lottery or achieve instant fame thanks to reality television, but more often than not, these folks don't enjoy prolonged prosperity.

There are no shortcuts to success. You have to be willing to work hard, stay focused, overcome obstacles and steer clear of "get rich quick" schemes.

Here's a look at how prosperity economics can help you win the long game of wealth:

There's a joke that's been making its way through the streets of New York for years. It goes like this:

Question asked by a pedestrian on West 57th Street in New York: "How do you get to Carnegie Hall?"

The joke is funny, but it's also true. Carnegie Hall is one of the world's most renowned concert venues, and people don't get to play there unless they are good—very good—at their craft and willing to become an expert. The same can be said for winning the long game of wealth; you have to be devoted to practicing prosperity economics and become an expert at managing your money.

How long does it take to become an expert? According to Malcom Gladwell, author of the best-selling "Outliers: The Story of Success," it takes 10,000 hours to achieve true expertise.

Gladwell bases his theory on a research study conducted by K. Anders Ericsson, a Swedish psychologist who studies human performance. During the course of his research, Ericsson discovered that between 1960 and 1963 an at-the-time-unknown band toured Hamburg, Germany, and played more than 1,200 shows. The band spent more than 10,000 hours honing their musical craft and would go on to become The Beatles, whose second concert in the United States occurred at Carnegie Hall.

So do you have to amass 10,000 hours of financial practice before you become an expert? Maybe. But don't let that dissuade you.

Even spending a little time thinking about, studying and practicing prosperity economics can make a big difference in your ability to build significant wealth. The key is to be intentional, determined and smart about learning from your mistakes as well as learning from others.

Sustainable financial success is not typically random. It requires devotion.

Did you know that Leonardo DaVinci was widely considered a failure until he was 46? Most people don't realize that the inventor, sculptor and painter faced failure for nearly half a century until he was finally commissioned to create his most famous work, "The Last Supper."

Until then, DaVinci had a reputation for starting incredibly large projects and leaving them unfinished. By the time he was 30, the only work he could secure was that of drawing portraits of dead criminals for law enforcement authorities.

But he was determined to succeed.

In 1498, everything changed. He was hired to paint "The Last Supper," which became his signature piece and made him one of the masters.

DaVinci isn't alone in going face-to-face with long periods of difficult years. Marie Curie lived in poverty for seven years before her pioneering research on radioactivity was finally acknowledged, earning her the Nobel Prize in Physics in 1903. John Coltrane practiced playing the saxophone every day for 17 years before he had his first hit song and album. And Stephen King typed his fingers to the bone every day for nine years before selling his first novel.

Everyone who achieves something great demonstrates incredible determination. The question you have to ask yourself is whether or not you have the determination to stay true to the principles of prosperity economics, even during difficult years.

If so, you are much more likely to win the long game of wealth.

In a world where the average attention span is eight seconds, it can be difficult to practice patience. Information and opportunities to mindlessly spend money exist at your fingertips. With the simple click of an online button, you have the ability to buy whatever you want, whenever you want it—especially if you've got a credit card in your hand.

But patience is what prosperity economics is all about.

Sure, instant gratification can temporarily put your financial fears at bay. But it won't last, and when you finally have to face the consequences of rash decisions, you are likely to be worse off.

That's why you need to pay close attention to the principles of prosperity economics, which include thinking, seeing, measuring, creating flow, control, moving and multiplying.

It means making smart decisions about your money (which may or may not include "hot stocks," working with Wall Street or 401(k)s.) It means doing the hard work of building your savings. It means looking for other investment opportunities, such as real estate or cash value life insurance policies.

But more than anything, it means avoiding the temptation to try to become an overnight financial success.

After all, everyone who has every achieved sustainable overnight success has devoted a great deal of time and determination to reaching their goals—even Vanilla Ice.