Can Gratitude Raise Your Net Worth? 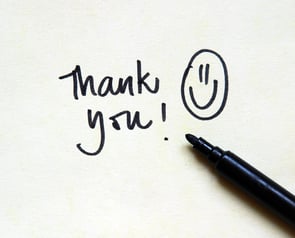 Saying thanks. Being grateful. Recognizing the blessings bestowed upon you, whether by family, friends, business partners or people you might not even know.

That's gratitude—and it just might raise your net worth.

Everyone knows that gratitude plays an important role in living a rich life that is full of contentment and inner wealth. But what not everyone understands is the important role being grateful plays in building financial wealth.

A 2014 study published in Psychological Science demonstrated a direct correlation between being grateful and making better financial decisions. You see, people who are grateful for what they have also seem to have the self-awareness and self-control it takes to leverage their money in ways that will deliver the highest possible returns.

In addition, the study pointed out that those who where the most grateful had the easiest time saving money. Apparently, they were more equipped mentally to eschew instant gratification in favor of long-term returns, which tend to be larger.

The study, which was led by a psychology professor at Northeastern University, offered participants an immediate $54. However, if the participants were willing to wait 30 days, they could receive $80, which doesn't seem like a lot of money until you consider that it would earn a whopping 48 percent monthly return.

That means that those who waited 30 days to receive their money would receive $48.15 every month for a year. That's more than 10-times what they would get if they took the money immediately.

For those who understood the principles of prosperity economics, the decision was simple: Don't take the money immediately because good things come to those who wait—and those who are grateful.

In fact, the researchers discovered that those who were in a grateful state of mind were much more likely to take advantage of delayed gratification. And it's not really anything new.

A study published in Psychological Science showed that people who are more grateful—those who are happy with what they have and not always scratching and clawing for more—are much more patient when it comes to making financial decisions.

In a sense, those who are content are less likely to make emotional decisions.

Taking the emotion out of financial decisions

Emotion often plays a role in monetary decisions. In fact, several studies indicate that people tend to make bad decisions when they mix their emotions with their money. Emotions lead to impatience, distrust and sadness, all of which can compromise your ability to make sound financial decisions.

And while it's not always possible or even practical to take emotions out of every decision, prosperity economics provides a framework that allows people to at least be aware of their emotions and how they affect the decision-making process.

But that's not to say that all emotion is bad. Gratitude, it turns out, leads to wise financial decisions.

This could be because gratitude allows you to make decisions from a position of contentment and confidence, which is what prosperity economics is all about.

When you are content with what you have, you are less likely to act in irresponsible ways to get more, and you are typically fine with waiting to realize your financial goals and dreams.

The power of delayed gratification

There was once a study done in which children were given a marshmallow and told they could have more if they waited to eat it.

Many children immediately ate the marshmallow.

However, those who waited—those who exhibited the ability to patiently wait—not only got more marshmallows, but also got many benefits later in life.

The power of gratitude combined with prosperity economics

What has become abundantly clear—through research as well as practice—is that combining the practice of prosperity economics with gratitude is a potent and powerful recipe for financial success.

The amazing thing is that it is incredibly easy to achieve both. Here are three things you can do to leverage the power of prosperity economics combined with gratitude:

There are so many things in life to be thankful for—even when times get tough. Be aware of them. Recognize them. Say thank you for them. It just might lead to economic prosperity.