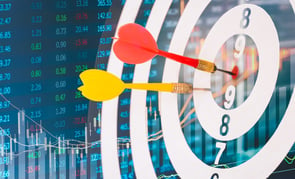 What do blindfolded monkeys have to do with your stock market investments? If you believe Burton Malkiel, an awful lot.

Malkiel is the author of A Random Walk Down Wall Street, which applied the mathematical theory of random walks to the practices used by Wall Street investors. In the book, he famously writes that "a blindfolded monkey throwing darts at a newspaper's financial pages could select a portfolio that would do just as well as one carefully selected by experts."

It was a controversial position to take back in 1973, when the book was published, and one that spawned a slew of stock-market-picking investment contests designed to either prove or disprove the author's point.

Was Malkiel correct? Keep reading to find out.

What The Wall Street Journal discovered

In 1988, The Wall Street Journal pitted stock market experts against the dartboard in their now-famous Dartboard Contest.

Journalists from the newspaper tossed darts at a stock table to determine which stocks were most likely to perform best while experts used their complicated algorithms and predictors to make their picks.

The experts squeaked by with a win during the first competition, but over the years, the dartboard proved to be an almost equally accurate way of picking stocks, winning nearly as often.

Over time, The Wall Street Journal refined its contest to include readers, who selected stocks from the New York Stock Exchange or Nasdaq market. The readers' stocks were then pitted against one another as well as stocks chosen by lobbing darts at the board.

Through the years, the results were split nearly equally between readers and darts. And as if to put an exclamation point on the blindfolded monkey comment, the dartboard won the final battle back in 2013, delivering an impressive 17.4 percent return rate.

Did the Dartboard Competition prove Malkiel's point? Maybe. But the author was quick to point out that the competitions weren't conducted in a manner as to give his theory a fair test.

The Massachusetts Institute of Technology is one of the country's premiere universities. It's where the big brains gather to solve some of the world's most vexing problems. So you can imagine the excitement that followed the 2014 announcement of a secret and exclusive group of MIT stock market analysts creating the most sophisticated algorithm in the history of the world that outpaced all of the major stock market and bond indexes for a decade straight.

In fact, the fund managed by people with PhDs in math, astrophysics and quantum mechanics more than tripled its investments.

One problem: While the results were real, the secret algorithm was fake.

Turns out that the algorithm existed only in the algorithm of Brett Arends, a blogger for WSJ.Money. What he really did was get a list of the world's top 3,000 stocks and then randomly picked some in which to invest.

When Arends broke the news to readers on his blog, he said that his portfolio was essentially "picked by blindfolded monkeys."

He went on to explain that the S&P 500 and the MSCI World Index are flawed because they "do not weight their members equally, but rather according to their market values." This flaw puts a disproportionate weight on the biggest and most expensive stocks and markets, which typically trend towards slower movements.

What the "Wizard of Winton" says

David Harding is called the "Wizard of Winton." He runs the world's 14th largest hedge fund, which has nearly 300 employees and more than $25 billion in assets. He built his company—as well as his nickname—by leveraging long-term investments in oil and gold to withstand the economic crash of 2008.

Even with all of his success, Harding was criticized for his trading system methodology, so he decided to prove a point.

In 2009, he chose 50 random stocks, weighted them equally and immediately out-performed the S&P 500.

And just in case you think the wizard's success was a fluke: As recently as 2014, his randomly selected system for picking stocks was still outperforming the market.

But what about the monkeys?

The Dartboard Contest and the wizard's random system are great fun, but they don't really speak directly to Malkiel's point about blindfolded monkeys.

For that, you have to look at a chimpanzee named Raven.

Back in 1999, Raven threw 10 darts at a board loaded with 133 internet-related companies. The companies struck with a dart were picked—and ultimately outperformed more than 6,000 money managers by earning a whopping 213 percent return.

More recently, a Russian circus chimpanzee named Lusha picked a portfolio that beat 94 percent of Russia's mutual funds. And then there is Adam Monk, a Brazillian cinnamon-ringtail cebus monkey who used to pick stocks for the Chicago Sun-Times by using a red pen to circle his choices in the newspaper. Monk outperformed the indexes from 2003 through 2006.

See? Malkiel must have had a point (although none of the monkeys were blindfolded when they made their picks).

Other animals have also been used to make picks, including a ginger tabby named Orlando from Great Britain. Orlando the cat took on a group of novice financial students as well as an experienced wealth manager, stockbroker and fund manager.

By the end of one year, the students lost money, the professionals gained 3.5 percent and Orlando delivered a return of more than 10 percent.

And the best part about using an animal to pick your stocks: low fees.

Throwing your own darts

If all of this has inspired you to go out and buy a monkey and a dartboard (or just start making your own picks), you may want consider a few things first:

Don't be the blindfolded monkey

At the end of the day, a blindfolded monkey (or British cat) might be able to match the experts who work on Wall Street. But that doesn't mean you want to base your picks on luck.

Make smart decisions by connecting with someone who can help you put in place a smart plan—one that is based on prosperity economics—to help you build long-term wealth.

Be smart when you are playing the game and making important investment decisions. Don't be a blindfolded monkey.