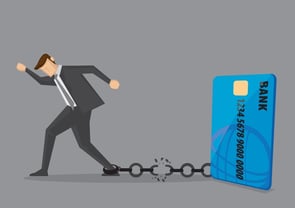 Americans are drowning in a sea of debt. Credit cards, first and second mortgages and car loans are creating an ever-rising tide that is slowly swallowing people's ability to live prosperously.

According to an Investopedia article, 43 percent of all Americans spend more money than they make each year. Instead of budgeting, living within their means and saving for rainy days and emergencies, they lean heavily on credit cards to pay their bills.

But that won't actually happen for years, according to one estimate that puts the number of Americans with more than $20,000 worth of debt at a staggering (but somewhat unsurprising) 2 million.

That's 2 million Americans who will spend the next 24 years toiling away to pay off their credit cards and struggling to stay afloat while they wait for payday to roll around.

It's actually not all that surprising that so many Americans are drowning in debt. Over the years, consumption has supplanted saving as the preferred way to enjoy all this great country has to offer. Here's why:

There is no easy way out—but there is a way

It's easy to get down about your debt. It's an albatross that can cause you to feel paralyzed with fear, unable to think clearly and unable to see a way out.

Of course there is a way out, especially for anyone who is willing to commit to the principles of prosperity economics. But it won't be easy. In fact, anyone who tries the "easy" way out of debt is likely to fail. There simply aren't very many viable and simple solutions to debt.

To succeed, you have to be willing to do the extremely hard work of understanding your debt, putting together a smart and strategic plan to attack it, and then following through on your plan.

The reason you have to understand how you got into debt is because, more often than not, the way you got into debt will affect how you get out of debt. There are two ways people most commonly get into debt: making it a habit and finding yourself in the throes of an emergency.

Those who make debt a habit use credit cards to pay for daily expenses. They use them for gas, groceries, eating out and even paying for a bottle of wine on a Friday night. Their credit cards (and the associated debt) are just a normal part of their everyday lives; it's how they make ends meet.

Those who are in debt as a result of an emergency probably never saw the tidal wave of monthly payments bearing down on them. They live within their means and always have, but something serious and unexpected happened that forced them to take on debt to make it through. Maybe it was a layoff; maybe it was a medical emergency. Whatever the cause, they are not in a bad financial situation.

The solution for those who are in debt due to their habits is likely simple, but it's never easy. They need to increase their income, decrease their expenses and change their habits. For those who find themselves in debt due to an emergency, the solution typically involves extra measures, including liquidating assets, significantly increasing income or even filing for bankruptcy protection.

What to do when you're drowning in debt

If you are one of the millions of Americans drowning in debt, you need to know that there is hope. You can get out of debt, but it won't be easy. You'll need to be smart. You'll need to have a plan. And you'll need to execute.

The first thing you need to do is remain calm. People who panic often try to take the easy way out (see: debt settlements via the "debt help industry"), which almost never works.

Here's a look at what good M.A.P.S. to financial freedom look like, according to renowned financial author Kate Phillips:

Find someone who understands prosperity economics and discuss your plan—debt snowball, negotiating with creditors, even bankruptcy (which can be a viable option under certain circumstances). It's always a good idea to run your plan by someone who understands and appreciates the principles of prosperity economics so you'll have the support you need to stay on the right path.

Getting support from an expert will make your swim out of the sea of debt a lot more manageable.

Build a lifeboat to a brighter financial future

Believe it or not, you can find your way out of debt. All you need to do is build yourself a lifeboat to a brighter financial future—and then row as hard as you can for as long as you can.

And once you are free from the riptides of debt, keep rowing! The skills you've learned and habits you've developed will keep paying off well into the future.