How Liquid is the Life Insurance Industry? 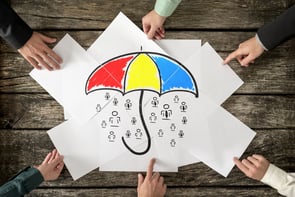 Without liquidity, even the most profitable companies are likely to one day find themselves in financial distress. And even companies that have stockpiled assets on their balance sheets can struggle with cash flow if the markets crash and their assets aren't liquid.

When an emergency emerges, assets can't save a company if the company's assets can't be easily converted into cash.

Even companies that seem entirely solvent under instances of normal operation—those with big cushions of shareholder equity, for instance—can quickly sink into a state of insolvency if all of their assets are long-term and illiquid.

The same can be said for individuals.

Ensuring that you have assets that are liquid is an important part of prosperity economics because it's what allows you to weather financial storms and make the most of emerging opportunities.

And that's why you should look into the liquidity of the life insurance industry.

Historically speaking, the life insurance industry has shown an incredible amount of resiliency, withstanding two of the most financially devastating events in the history of the United States—the Great Depression of the 1930s and the Great Recession that began in 2008.

Here's a look at the things that affect the liquidity of the life insurance industry and how you can put it to work for yourself.

Interest rates have been at historic lows over the last few years, and that has some analysts concerned about the current stability of the life insurance industry.

As you can imagine, the historically low interest rates have affected the earnings of life insurance over the last seven years or so. However, most analysts agree that the current low-interest rate environment has not materially mattered to life insurance companies' ability to remain solvent.

In fact, the vast majority of life insurance companies are as resilient as ever right now.

The role of the Federal Reserve

No other institution has as much control over interest rates as the Federal Reserve. In fact, it is the chief instigator of the current low-interest rate environment.

Since the Great Recession began in 2008, the Federal Reserve has been trying to stimulate economic growth by deliberately lowering interest rates to historic levels. It's done this by acquiring massive amounts of assets, which has resulted in effectively pushing down the fed fund rate to zero.

By the end of 2013, the rate had bounced back up to 3.04 percent, but it has once again come back down to earth because the economy has remained anemic.

It appears the Federal Reserve plans to do what it can to keep rates low until the economy bounces back more fully—and this isn't necessarily good news for the life insurance industry.

But it doesn't mean businesses and individuals should avoid the industry altogether, either.

What the experts say about life insurance

Even with the historically low interest rates and the economic uncertainty, many market analysts still say that the life insurance industry is healthy.

At the end of 2015, both Moody's and Fitch predicted a stable 2016 for life insurers. Those predictions proved correct—and it looks like the year to come will be every bit as stable.

One of the reasons the experts seem to agree on the health of the life insurance industry is the fact that about 50 percent of the industry's bond portfolio is made up of investment-grade corporate bonds, which typically have higher yields. These bonds protect life insurance companies from further economic downturns because they can be quickly converted into cash, if necessary.

So the experts agree that the life insurance industry is in pretty good shape. But before you run out and invest all of your money in the industry, you should understand with absolute certainty what the long-term effects of low interest rates might be on life insurance.

Towers Watson is a global professional services firm that specializes in risk management. When the company sent a survey to chief financial officers at the top life insurance companies in the country, it was hoping to discover what their largest concerns were.

Turns out they were worried about the low-interest rate environment.

In fact, 97 percent of those who received the survey responded—and every one of them said that the low-interest rate environment was their number-one concern.

The survey results weren't entirely surprising because everyone knows that the industry's earnings are typically derived from the "spread between their investment returns and what they credit as interest on insurance policies and products," as the Center for Insurance Policy and Research put it.

Therefore, if insurance companies "contractually guaranteed obligations exceed achievable returns in the capital markets for a certain length of time, life insurers' ability to meet expectations can be greatly reduced."

What the Center for Insurance Police Research describes is occurring, according to a National Association of Insurance Commissioners (NAIC) study.

The NAIC took a look at the financial statements from 2007 through 2014 of 713 life insurance companies and saw that investment net spreads declined 55 basis points during the seven-year period.

It's no wonder, then, that the survey says life insurance CFOs are concerned about low interest rates. The real question is, should you be concerned?

Even in these times of historically low interest rates, life insurance policies have been able to provide returns of around 5 percent, according to the NAIC study.

This means that policyholders are still being credited back with the same interest being earned in capital markets, and it means that earning compression is coming into play.

Minimum valuation interest rates on new policies are determined each calendar year and locked in at policy issue. After that, they don't change at all. Over the last seven years, these minimum interest valuations have been gradually going down in order to relieve some of the stress associated with earnings compression.

Even so, the interest credited back to policies is still generally greater than any other interest rate offered by other "safe" investments in the market, such as certificates of deposits or other similar products.

So even though earnings compression isn't necessarily a good thing for companies and individuals who have invested in life insurance, it's not the end of the world, either—mainly because the law requires life insurance companies to have policy reserves.

Policy reserves are assets held in custody that can be used to cover all present and future claims. Policy reserves essentially ensure that policy holders are guaranteed to be paid—and that's something that most other investment vehicles simply cannot deliver.

But that doesn't mean you should ignore the low-interest rate environment and dive headfirst into life insurance.

Mitigating your risk in a low-interest rate environment

Life insurance companies are nothing if not prudent. They are constantly running financial models—and they work closely with state insurance regulators.

They do this to protect themselves as well as the people who invest in their products. It's their way of mitigating risk to everyone involved by ensuring that the assets they have in reserve are large enough to cover any liabilities the company may incur down the road.

And they constantly run their stress tests—more than 1,000 scenarios by the time they actually have to pay out.

What this means for you, the investor, is that you can rest assured that the companies are working to mitigate your risk—and the financial ratings institutions are paying attention to their work.

If you invest with an insurance company that has solid ratings from the three largest rating agencies, you can be sure you are investing with a solid company.

Protect yourself with liquidity

If you don't understand how the industry works, it probably seems nothing short of amazing that the life insurance industry has been able to weather so many years of low interest rates.

Fortunately, the industry is built to protect itself and its customers, and that is exactly what it has been doing. This is why so many companies have invested so heavily in life insurance.

It's liquid. It's doing a good job of protecting itself against the current economic challenges. And it provides liquidity, which is what companies—and you—need when emergencies and opportunities arise.

Protect yourself by ensuring that your assets are liquid. Consider investing in life insurance.