Meet the Only Banker You Can Ever Truly Trust: You 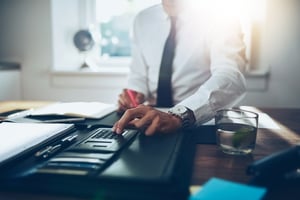 That is the level of confidence Americans have in banks, according to a 2016 poll conducted by Gallup.

That's down from 2004, when 54 percent of the country had either a great deal of confidence or quite a lot of confidence in their banks. Not surprisingly, the decline began in earnest right around 2008, when the Great Recession hit like a financial hurricane – leaving retirement accounts, the housing industry and people's financial futures utterly decimated.

So if you can't trust banks, who can you turn to when you need money?

The answer is you.

Most Americans are raised to believe they have to turn to (and trust) banks to purchase big-ticket items, such as automobiles, homes and businesses.

And while the system of relying on banks has served some people well, it also comes with a great deal of risk, as evidenced by the Great Recession.

Banks don't always have your best interests in mind. And contrary to popular belief, banks fail. Already this year six banks have failed, according to the Federal Deposit Insurance Corporation.

So if you can't trust banks to act in your best interest (or even be there when you need them), why not bank on yourself by practicing infinite banking?

Infinite banking involves taking out a dividend-paying, permanent life insurance policy, building up a significant cash value and then borrowing against that cash value to pay for major purchases such as homes or automobiles.

And it comes with an array of benefits.

The benefits of infinite banking

These loans can then be used to purchase whatever you want. You can invest the money, splurge, or spend it on major purchases.

When you practice infinite banking, you are essentially mimicking the way banks operate by borrowing money at a lower interest rate, putting it to use for you and then earning a return (at a higher interest rate).

In addition, the money you borrow from your life insurance policy is still earning dividends – even though you are using it elsewhere.

The only difference between what you do as your own banker and what a bank does is that banks use other people's money. You will only be using your own.

But at least then you know that you can trust your banker.